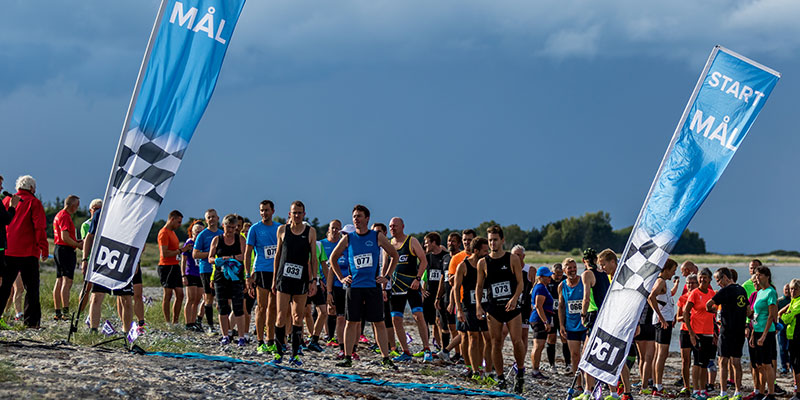 Do you want to run a marathon over 5 days, or a half marathon over 3 days, together with a lot of other runners in scenic surroundings? Then you can still participate in Etape Møn.

Etape Møn gives you the opportunity to complete the 42,195 kilometres divided into 5 stages.

No matter what distance you choose, we guarantee a different kind of running experience in a friendly setting.

To give you an idea of what Etape Møn is and what it can offer you, we have spoken with two runners who participated last year. They were both so excited that they also are going this year.

Per John Frandsen is 53 years old and lives in Vordingborg. He is a member of Nyrød Running Club, with whom he runs with 3 times every week. In his running club it has become tradition to participate in Etape Møn. Therefore Peter is also going this year, together with 11 other runners from the club.

Whats is special about Etape Møn?

“Everyone can participate. Big as well as small. Experienced as well beginners”

“There was a relaxing and friendly atmosphere at all the stages. Nice and good people. And it was nice to exchange experiences with people from south, east, north, and west. Furthermore, there was an incredibly fun and cozy party on the last day, which gave me the opportunity to talk with the other runners about the past week.”

“There were some experienced runners that were off in full speed every night when the stage began. Whilst the rest of us experienced that our average speed fell during the week because our legs grew tired. As the days went on you found others with the same tempo as you, this was really nice as you got to know other people.”

“I think that the run was very well organised. My experience was that everything went smoothly for example with marking of the routes and getting my runners number.”

Why have you chosen to participate again this year?

“I think that it is very nice because we are so many from my local runner’s club. We have a lot of fun both before and after the stages. And as the week passed a quite special community arose amongst the runners. Moreover, I really like to run in the varying nature of Møn. To run on the beach and in the hilly landscape around Møns Klint.”

Maria Birch Nielsen is 43 years old. She lives in Sværdborg together with her husband and their two children. In 2012 she started, together with the local sports club, the runners club 47½ Løberne-Lundby, where she today still is active as chairman and trainer.

What is special about Etape Møn?

“Etape Møn is a scenic marathon where every night offers a new and challenging route in the beautiful nature on Møn.”

“I have for quite a few years wanted to try a run divided into stages. And others had told me that the atmosphere at a run like this is very special. The experience of running with other people day after day, route after route, meeting people again and again is something quite unique. It was very nice. To me, it wasn’t a race against the other runners but more for the sake of enjoyment. “

“The routes were great. Different distances in various surroundings, where you were presented with the beautiful nature of Møn. The routes were also challenging. Usually, I run on asphalt, so as one of the routes was in the sand I definitely got out of my comfort zone.”

It was tough running every day for at for a week especially when you haven’t tried it before. It was a challenge for me. A test of the body – and I withstood. My legs got sore already on the 2. stage, so on the 3. stage I made sure to do a warm up before. I properly should have warmed up before every stage.”

Why have you chosen to participate again this year?

“The positive memories of last year is the reason why I am going again. And this year I want to see if I can beat my own personal record from last year. Moreover, I love that it is local – I want to support that.

Overview of the 5 stages

The route is 3.6 kilometres long and makes it through the city twice.

When the night settles on Bogø the third stage begins. The route is 6.9 kilometres long which extends to a star with four branches.

The fourth stage is a green and fantastically beautiful route on 10.6 kilometres and plenty of sea view. The route is relatively flat and the majority is on wide forest trails.

The run finishes of being wild, hard and beautiful, going from Klinteskoven to Møns Klint it stretches out over 7 kilometres.