If you appreciate equipment with a cool and raw design, you will love the DARK light for its simple design and futuristic look. Orbiloc Safety Light in its purest and most minimalist form. Jan and Anette, founders of Orbiloc, reflect on the process of developing a new colour.

Why did you choose to add DARK to the Orbiloc colour universe?

Anette: We wanted to complement our series of lights with a more masculine colour. And, if it is even possible to say it like that, the colour had to be “pure and simple”.

Jan: The Orbiloc lights have been produced in five colours from the beginning– colours that are used in professional contexts and for different purposes, colours we refer to as Safety colours. The yellow lamp, for example, is often used for road workers and similar, and the green and red are used both on the sea and in the air to indicate the right (starboard) and left (port) side.

Anette: In 2016, we launched two new colours for the first time that did not relate to the professional world. These colours we refer to as Fashion colours. The colours in our fashion colour range– as the name suggests – are inspired by current trends. Regardless of which colour palette we see in fashion, black and grey will always be in style – and therefore the new colour of the year is DARK.

What inspired you to develop the DARK light? 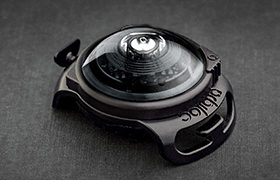 Anette: DARK is launched as part of our fashion category, with a strong link to the professional world. To achieve a more masculine expression, among other things we have sought inspiration from the military, which is also part of our background story. The smoke-coloured lens is directly based on the lenses found on a variety of military and police infrared lights.

When should you choose DARK?

Jan: DARK has an LED with a xenon-like white light, and DARK therefore has the same characteristics and advantages as the white light. The bluish-white light, characterised by a fresh and clear output, can both be used to shine through fur, as a signal on a buoy and as a small extra flashlight, you can fit in your handbag.

Who should choose DARK?

Anette: The expression of DARK is simple, minimalist and exclusive. We spent a long time looking for an LED that would provide the exact xenon-like white light, for example known from the headlights on luxury cars. At first, we expected DARK to appeal mostly to men, however, I also believe that women will find it appealing due to its pure expression.

What does the DARK launch add to Orbiloc’s product range?

Jan: DARK adds simplicity to our fashion category, and I dare to say that we are the only ones with a DARK safety light (that is not an infrared light). When we have shown the DARK light to others, it has been referred to as a diamond, so it’s truly unique. The Orbiloc Safety Light was originally designed by the design department of Danish Architects, FRIIS & MOLTKE, and I really think the architectural design is underlined with DARK.

What is IR and Xenon light?

Infrared radiation (IR) – also referred to as infrared light – is electromagnetic radiation with longer wavelengths than those of visible light, and is therefore generally invisible to the human eye. Night-vision devices using active near-infrared illumination allow people or animals to be observed without the observer being detected. Within the military IR light enables friendly forces to maintain location and identification of blacked-out vehicles such as convoys or transport that wants to pass through areas undetected at night.

Xenon light is often seen as headlight on high-end vehicles, giving them that premium and stylish look. Xenon bulbs produce a bright even light that might seam bluish.